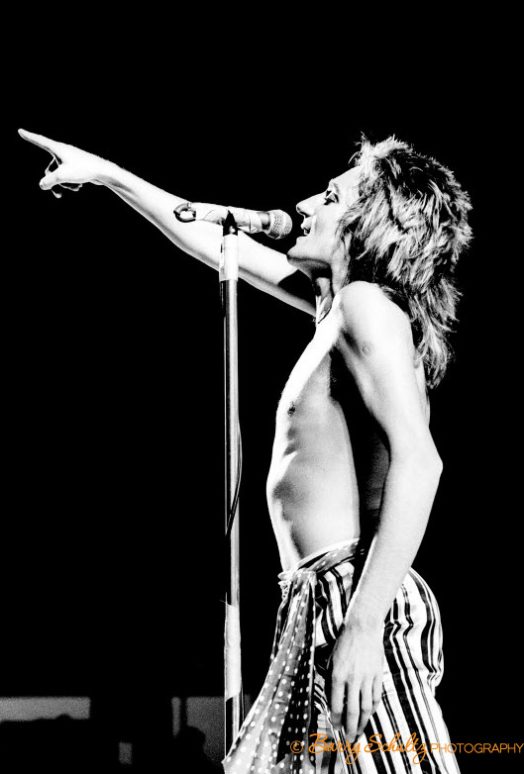 When I first heard Rod Stewart’s voice on the radio, I wasn’t a fan. But later, when I went to his concert, I was won over. It was one of the best concerts I ever saw!

There was so much energy, so much rock ‘n’ roll, the band was fantastic! Lots of extended versions of songs were played. And at the end of the show, everybody was dancing up on their chairs.  Really, I put this concert up there with the Stones and Roxy Music.


After the concert, we all went back to their hotel in Amsterdam. There was a big party, because it was Rod’s birthday! The record company had arranged a big Scottish band complete with drums and bagpipes. As most people know, Rod is a huge football fan, and there were some famous Dutch football players at the party too.

Rod was there with the gorgeous Britt Ekland, his wife at the time. I shot them backstage, arriving together, as I did in LA three years earlier. I had put some of my famous pieces of colored paper up in the hall of the Sonesta hotel to shoot some portraits of Rod, but unfortunately, he canceled on me. I guess he was having too much fun celebrating his birthday! I can’t say I blame him.

The next day, I went back to the hotel to capture him as he was leaving. All the other band members showed up, but no Rod.

Recently, Rod was in the news after announcing that he has been given the all-clear after having been diagnosed with prostate cancer two years ago.

I am so happy that he’s okay!

A while ago, I was contacted by an artist in the US. He had seen my pictures of Rod, and really like them. In fact, he was so inspired, that he wanted to use one for his painting. Of course, I happily agreed and here is the result.

Still doing what he loves best

On November 22nd, 2019, his new album was released (https://www.rodstewart.com). He also did a few shows in Vegas, and a short tour in the UK. I hope he comes back to the Netherlands again soon, too. And of course, that he stays happy and healthy. ‘Cause, man, can he rock!

The time I stared at Cher