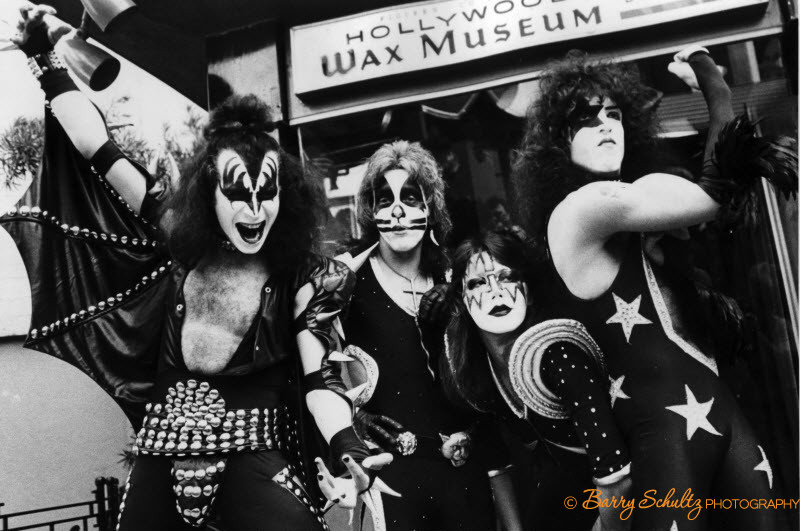 This is the way I remember it…
One day, when I was working in Los Angeles, I was asked to shoot a group. They promised a big surprise.
I was told to be at the Chinese Theatre on Hollywood Blvd the next day. Very mysterious!

A couple of other photographers were waiting there too, when all of a sudden a limo pulls up, and out comes the weirdest bunch of guys that I had ever seen in the rock business.

At the time, it was quite common for groups to have some kind of a “gimmick”. I have seen groups with no shoes, groups wearing black gloves, other groups that had the lead singer’s hair on fire. But these guys were way over the top. They had giant heeled boots, weird uniforms, and scariest of all, full face make-up! These guys looked like they just climbed out of a spaceship.

They ran around the front entrance of the theatre much to the surprise of the many foreign tourists there at the time. Within a few minutes, they were back in their limo/spaceships and gone in a flash. Personally, I thought it was one big joke. Something to laugh off and to soon be forgotten.

After seeing this group I was certain that they would not last long at all and be totally forgotten about in a few weeks. Well, they turned out to be one of the biggest selling bands of all time, selling more than 100 million records worldwide.
And now, forty years later, they have announced The Final Tour Ever – Kiss End Of The Road World Tour, throughout all of 2019.
How is it possible that I could have been so wrong about this group? Only the Kiss Army knows for sure, I guess.