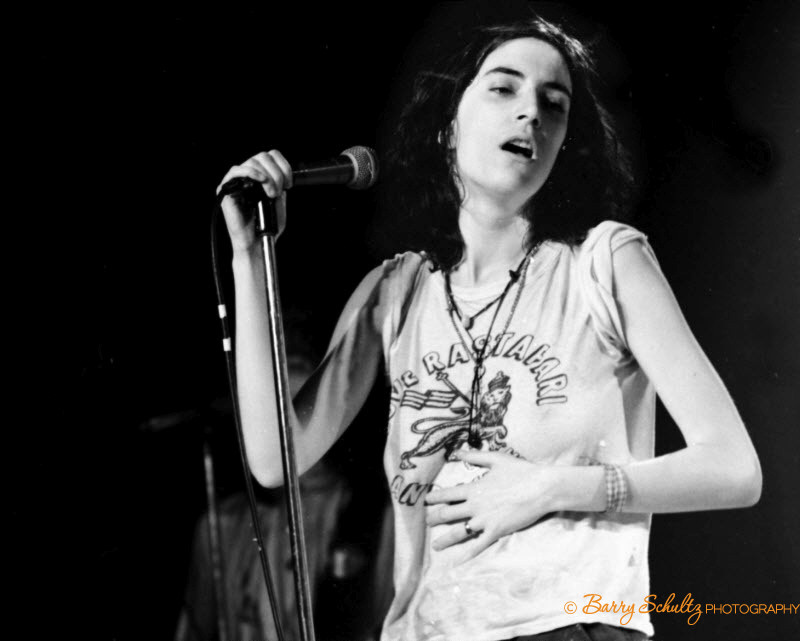 She’s so cool. Patti Smith, the Godmother of Punk. This woman is incredibly diverse and talented!

Coming from a strict, religious background, she struggled with poverty and had relationships with interesting men such as Robert Mapplethorpe and Sam Shepard.
She worked many jobs and met interesting, influential people. She’s a writer, a songwriter, a singer, a poet, and even an actress – once.

By 1974 she had her own band, and by the time I photographed her at the Roxy in L.A. in 1976, they had just released their first album, Horses, the year before. It was a unique and tantalizing combination of punk rock and spoken poetry, and opened with an adaptation of Van Morrison’s ‘Gloria’.

When I took these pictures, during Patti’s 1975/1976 club tour at The Roxy on Sunset Boulevard, musician/producer John Cale joined her on tour.
After producing her debut album Horses, he supported her in 1976 on numerous concerts, often joining her on stage to play bass on the My Generation encore.
I was most lucky to get some backstage shots of Patti & John and the band.


She’s touring again and is coming to Tivoli in Utrecht, the Netherlands on January 27 and 28, 2019. I hope the concert will be electrifying, like it was in 1976. I remember the place being packed with fans and other musicians. She’s always had a great following. I particularly liked her version of ‘Gloria’, even though the original version by Them, written by Van Morrison is also amazing. Luckily, I don’t have to choose. They’re both great.

Here are all my Patti Smith pictures.