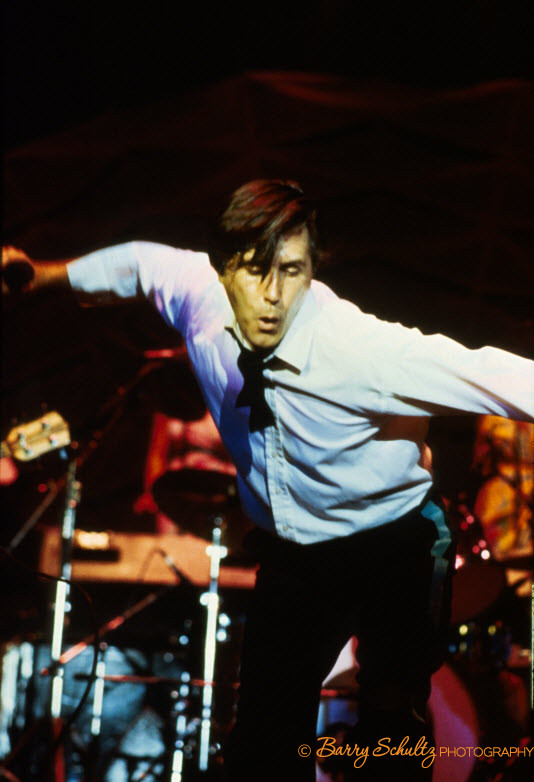 On November 30th, 2018, Bryan Ferry will be releasing a new solo album. We all know him well from Roxy Music.

I remember going to see Bryan Ferry with Roxy Music at the Concertgebouw in Amsterdam. It was December 8, 1978. Outside, it was cold. But inside, there was such an amazing warm energy going on.

I was right in front of the stage, like I usually was, taking pictures. I took a few shots but then the weirdest thing happened. I slowly lowered my camera, mesmerized by the music, and stopped taking pictures!

This was the first, and only, time this ever happened to me during my career as a pop photographer. I just listened to the fantastic music and thoroughly enjoyed the concert. I guess I forgot I was supposed to be working! Oops…

The shots that I did get are pretty good, though. They really show the energy of the show well. Bryan seemed to be having a great time and I remember also be very impressed by the sax player, Andy Mackay. I also remember seeing somebody play a glass violin. It was magic!

I wonder if the new solo album will be just as good as that show. Apparently, the new album, which is called Bitter Sweet, was inspired by the soundtrack he wrote for the Netflix show Babylon Berlin. The album will also contain a few new interpretations of old Roxy Music songs.

Bryan Ferry will be coming to the Netherlands for three shows next year. He’ll be at the Oosterpoort in Groningen on May 20th, at the Muziekgebouw in Eindhoven on May 22nd, and at the Carré in Amsterdam on May 24th.

Here are all the pictures I took of Bryan Ferry.