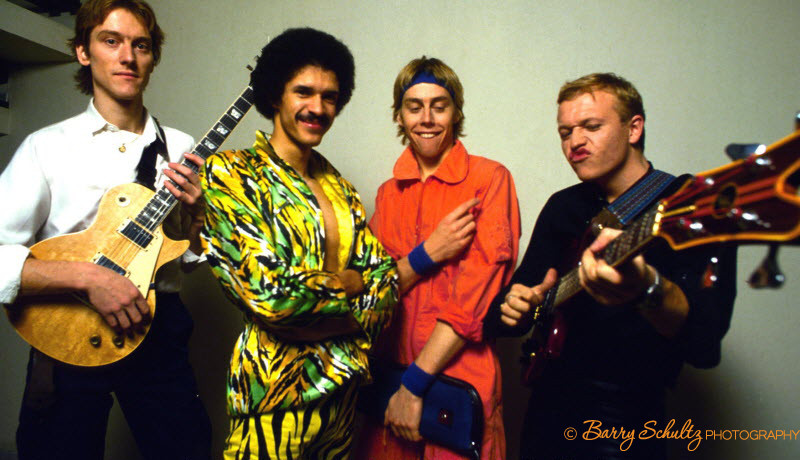 Back in 1981, I was looking for speakers at the RAF in Hilversum. I worked in Hilversum a lot, since the Dutch studios were mostly there back then, and the tv program TopPop was taped there.

So I walk into this beautiful store, with stereo equipment everywhere, and different departments for different music, and a salesman approaches me. “I’m looking for speakers,” I said.

He took me back to the speaker department and put a record on the turntable to let me hear the speakers (remember, it was 1981). The record they played was by Level 42. I had never heard of them before (again, it was back in 1981) but I was digging it! “If I buy the speakers, can I get the album too?”

Shortly after, I went to photograph some artist or band at TopPop again, I don’t remember who. And the guys from Level 42 where there! I didn’t even know!! They were just leaving, but I asked them if I could please take a couple of pictures. They were very nice and jovial and were fine with it all. I got a couple of nice shots.

When I told them the story of the speakers, and how I digged their album, they said: “That’s nice,” and walked off. I’m not sure what they really thought of my story.

I’m a fan and still play their upbeat music regularly to this day.

On November 4, 2018, they will be playing at the pop temple Paradiso in Amsterdam. Unfortunately, the concert is sold out. Does anyone have any tickets??