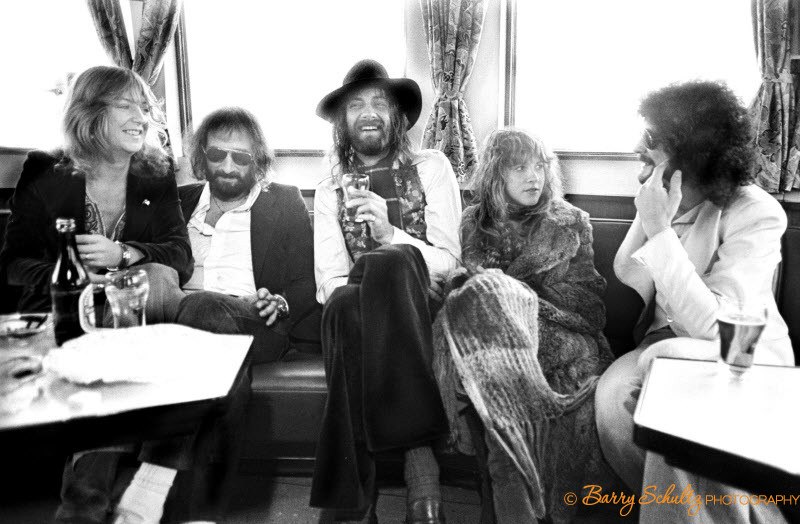 In April 1977 on a sunny spring day, some music journalists and myself were invited to join Fleetwood Mac on a boat touring the harbor in Rotterdam. The press tour was to promote their latest album, Rumors.

Warner Brothers and the band expected it to do better than their previous release, Fleetwood Mac. Little did anyone know, it would become one of the most popular and influential records ever created.

It was a tumultuous year for the band. They appeared in many gossip columns and tabloids. John and Christine divorced after 6 years of marriage. Lindsey and Stevie broke up. Mick divorced Jenny just to remarry each other soon after, and all of this happened in the span of a year. It seemed clear they couldn’t live with, nor without each other. Though, everyone but Stevie brought a new partner on board.

The band moved about the boat giving individual interviews. Before that, I started speaking with John McVie about the emerging ‘euro sound’. He’d never heard of it before so I used ABBA as an example. He replied, “Who’s that?”. Ignorance is bliss.

Everyone was nice and pleasant, though it was difficult to strike up a conversation because they were all being interviewed. I concentrated on taking pictures, primarily of Stevie. She makes a prettier picture than John or Lindsey.

After the interviews and pictures, we left the boat and the band remained to get a tour of the harbor. That night they played a show at the Jaap Edenhal in Amsterdam where I got some good live pictures of them.

I don’t care much for scandals and gossip, but I absolutely love Rumors.

You can see Fleetwood Mac live (minus Lindsey) starting this October as they begin a 50 date tour of the US.