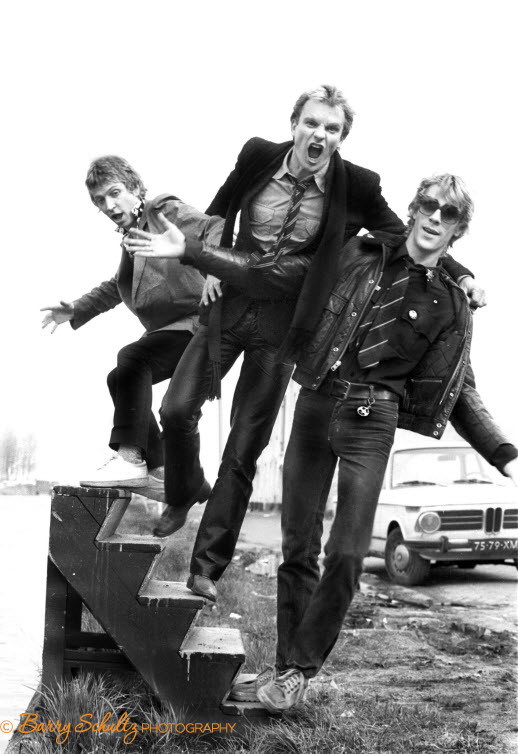 A couple of years after I had moved to Holland, I heard through the grapevine that The Police were going to be in Amsterdam for a performance on Rock Planet. I’d heard great things about them through Cream magazine, but they were not a well-known act yet.

As I entered the studio, So Lonely was blaring through the studio speakers as the band lip-synched to the tune. Like many bands, The Police treated lip-syncing as the joke it was. Andy replaced his microphone with a banana, Sting was eating in the middle of the take, and Stu was thrashing a palm tree with his drumsticks. They were clearly enjoying themselves.

A band fooling around for a lip-synced performance isn’t unusual. However, the entire studio being empty besides myself and the band was. No director, floor manager, band manager, producers, nobody at all. I seized the opportunity and pulled my camera out and slapped in a roll of Tri-X 400 and began taking pictures. The band didn’t seem to mind and I got some really nice shots all the while thinking, ‘It’s too bad these guys aren’t famous.’

After the recording, I asked the three of them if we could take some pictures outside. They agreed so we headed out into the cold winter day beside a canal. They were very friendly, funny, and cooperative. We had a good time and when I finished my roll of film we all agreed it was enough and headed back inside away from the cold.

Later on, when they became huge I was invited to join them on a press junket to Paris. There I met Miles Copeland, their then manager, and Stu’s brother. I showed him the photos I made in Amsterdam but he said he couldn’t use them as they were smiling and the band wanted to project a more serious image.

I saw them again while they received a gold record in Amsterdam. Andy, the friendliest of the bunch, told me that my pictures were used in the band’s world tour book. I approached Miles to say he should have asked my permission and compensated me for my work. His response was that he “owned the band”, and therefore owned all likeness of them, including pictures. I couldn’t believe what I was hearing.

Andy had heard the exchange and immediately wanted to make it up to me. He promised me an exclusive session with them backstage at their next gig in Cologne, Germany. So, I went to Germany. I pounded on the backstage door until Andy let me in and persuaded his bandmates to do a quick photo session with me.

Many years later in 2007, Sting published a book called Lyrics. He had hand-chosen 12 pictures out of the millions that had been made of the band over the years for the book. One of those 12 pictures was of the three of them, clowning around next to a canal on a cold Dutch afternoon.

Here is the band playing So Lonely on Rock Planet.