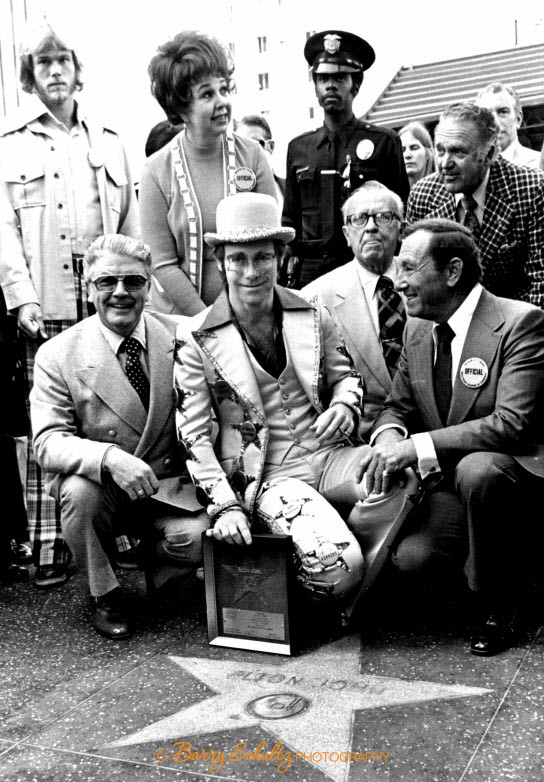 Elton John is starting his 300 date farewell tour in September. However, farewell tours have always had a dubious quality to them. Or as Neil Young puts it, ‘”I’m not coming back.”What kind of bullshit is that?’

I first shot Elton in Los Angeles in 1975 while he received his star on the Hollywood Walk of Fame. Dressed in stars and sequins, he drove a golf cart adorned much like himself, complete with a piano styled cushion, vanity lights, and an elegant telephone. Despite his traditional garish dress and ludicrous accessories, he seemed slightly embarrassed by it all. In one picture he looked directly at me with a face that seemed to say, “Isn’t showbusiness stupid sometimes?”

Four years later I would photograph him again. This time without the elaborate costumes people had come to expect. Instead, it was just a talented man in a floppy hat and sweatshirt at a piano. Of course, I was very disappointed that he chose to wear such boring clothing and no outlandish glasses as I was sure to sell fewer photos to the color pop magazines. Because just like David Bowie, everyone’s thinking, “I wonder what he’s wearing this time!”

During the encore, I made my way right up to the stage and got him to look directly into my lens. It was a great picture despite the promoter being furious I’d used my flash. But it was well worth it as it ended up being a single sleeve.

Be sure to check out this video of Elton at the piano in 1971 doing a brilliant solo version of ‘Tiny Dancer’. This song was also featured in one of my favorite films, ‘Almost Famous’.