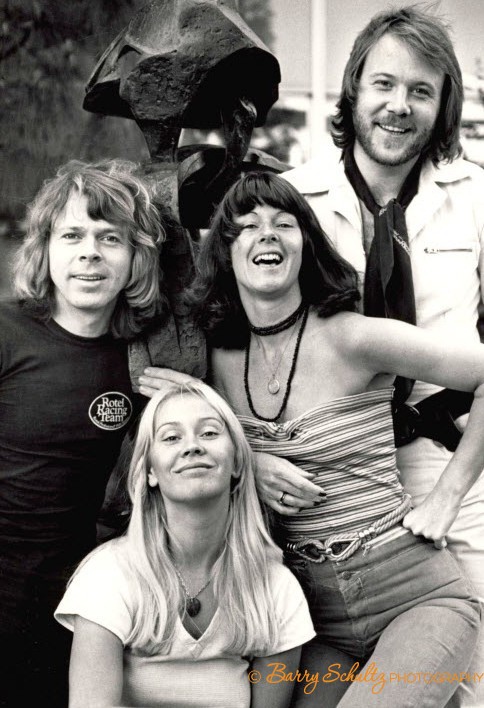 When I moved to Holland and started photographing pop groups, I would call the Avro Toppop studios every week to ask who was coming to the show.

The first time they told me Abba was coming into the studio, I thought that I would pass as I was not a fan.

But then they became extremely popular and the pop magazines here were full of pictures of them.

The second time they planned to appear at Toppop, I made it a point to go and made these pictures of them posing outside the studios in their normal street clothes.

Luckily it was a sunny day and they were very friendly.

When they gave a concert in Amsterdam as part of their European tour in 1977, I photographed their concert at the Jaap Eden Hall which was an indoor iceskating rink.

There were wooden boards placed over the ice but you could feel the cold through your shoes and socks.

My official photographer’s pass was only good for the first three songs.

When the third song ended and all of us photographers were ordered to leave the hall, I stayed low and waddled backwards into the first row.

I asked the two young girlfriends if I could please sit between them and if they let me, I would send them free pictures of their favorite popgroup, Abba.

They agreed and so I stayed to shoot the whole show! I gave them my card.

It turns out that one of the girls was the daughter of the famous Dutch football player Sjakie Zwart.

I photographed Bjorn and Benny again when they came to Amsterdam to promote a new tour and album in 1979.

ABBA are in the news again as it has recently been revealed that they are planning a comeback sometime in the next year or so. To see the rest of my photos please click here: https://www.barryschultzphotography.com/artist/abba/

For more news on the reunion go to http://www.bbc.com/news/entertainment-arts-37776505